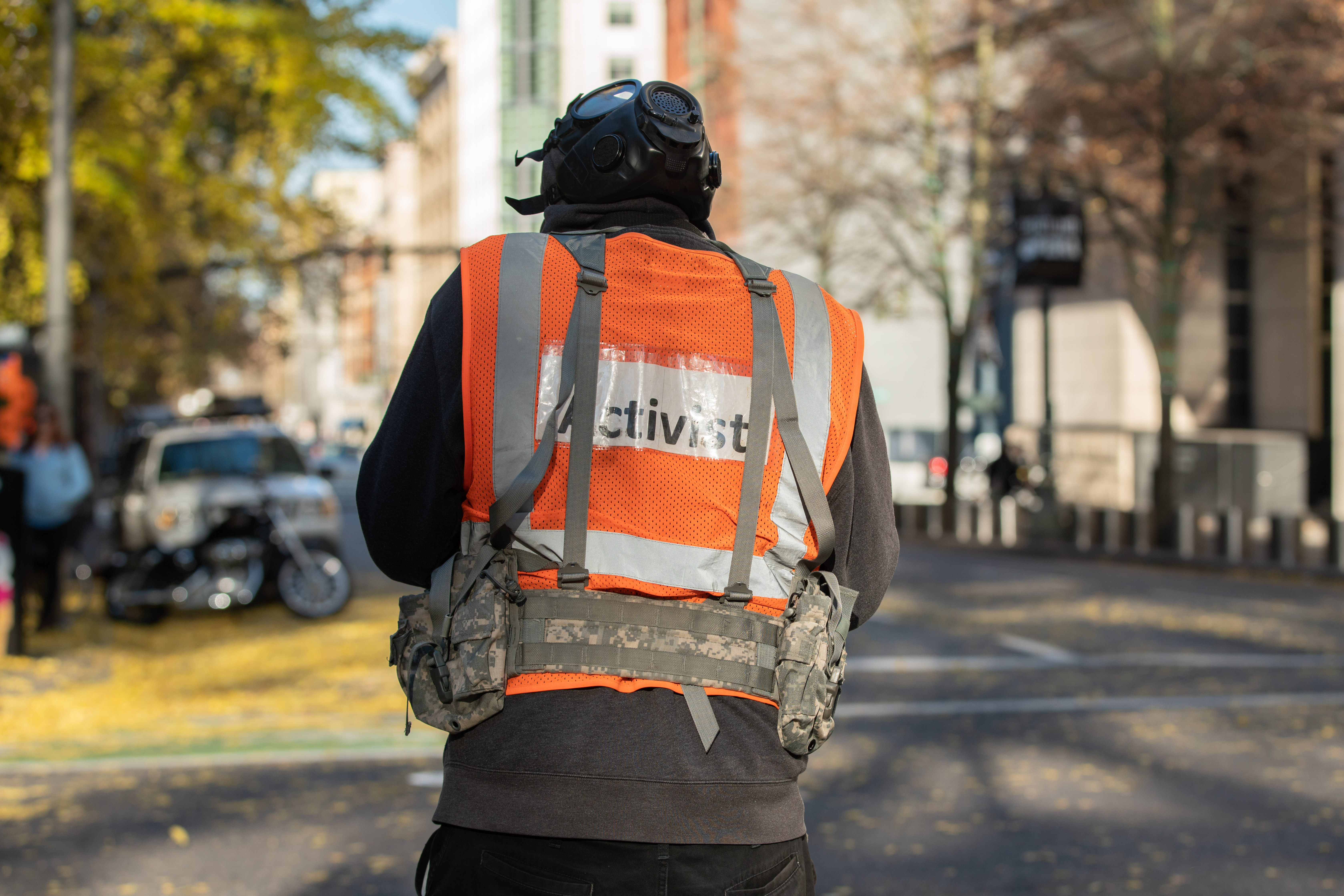 In July, veterans of all races organized to form a wall of protection around protestors in Portland. One organizer explains how he helped form the Wall of Vets.

2020 has seen tumultuous times — pandemic, civil unrest, and economic downturn. But, thankfully, folks from all walks of life have stepped up to help others this year.

It may be totally grassroots, loosely organized, mostly dispersed, and operated and arranged via social media, but the Wall of Vets movement, as it’s come to be known, is working to connect U.S. veterans who want to help protect protesters all over the country.

Leshan Terry is a Navy veteran who lives with his wife and two kids just outside Portland, Oregon, and he says that his wife, Tessa Terry, who is also a Navy vet, was one of the first people to start organizing the Wall of Veterans in the area in July, following the attack, captured on video, of Navy veteran Christopher David by federal agents.

The federal agents broke David’s hands and sprayed him with a chemical irritant during a protest on July 18 in downtown Portland. Reports say that David had come to the protest to ask the federal agents why they were not honoring their Constitutional oath to protect the people of the United States. A local reporter caught video of the confrontation, which shows David standing with his arms at his side, being hit by an officer with a baton, and then being sprayed in the face with an irritant. The video has been viewed more than 14.6 million times as of August 24. Terry and his wife were amongst those viewers.

“My wife was one of the original organizers of the Wall of Vets,” Terry says. “She’s still a chapter organizer here in Portland. We went out there and formed a wall, just like the moms and dads.”

Like the Wall of Moms and Dads before them, the Wall of Vets began as the ongoing Black Lives Matter (BLM) protests faced increasing violence and aggression from both local and federal authorities all over the country. Portland has been a hotbed for the protests for more than 80 days according to the New York Times.

Search for #wallofvets on any social media platform and you’ll see a wide variety of handles that have popped up from coast to coast. There are Twitter handles for groups everywhere from Portland, where the movement gained some of its first national media coverage, to Jacksonville, Florida. The Wall of Vets Command Center Twitter handle, @VetsWall has more than 42,000 followers and offers a linked Google spreadsheet of local Wall of Vets chapters all over the U.S.

Terry says that he and his wife had been participating in the protests in Portland with the Wall of Moms and Dads, and with BLM, prior to organizing the Wall of Vets. He and his son were photographed at the protests on July 31. After they saw the attack on David, the Terrys decided they needed to do something more.

“We organized the group on Facebook, we reached out to vets,” Terry says. “We put out a broad call on Facebook, my wife connected with Chris, and he had a lot of vets trying to support him and to donate money for him and help with his medical expenses.”

Leshan says that once veterans saw what happened to David, many felt that they wanted to help support and protect the protesters who were there to gather peacefully and protest in support of BLM.

“We organized and met up where the wall of moms was meeting and we formed up into a formation,” Terry says. “I did a safety brief with the vets. I told them that we are here as a barrier, but if we get to a point where we can’t take the pepper spray, or the feds shoot you with rubber bullets, take a step back, we want to make sure that everyone is safe. The vets were like, if they are going to be shooting civilians, they are in the service just like us, just like we were, they are going to have shoot their own veterans.” Terry says.

Terry says that he and his wife have organized 15 or more protests with the Wall of Veterans in Portland since the movement began.

“Sometimes when the federal agents would come out, that’s when the veterans would be like, Hey we are vets too, we don’t have to do this right now, look at all these people who are non-violently protesting,” Terry says. “The tactics that the officers were using were blanket tactics. We’re here as vets and asking you please stop this. We have vets in wheelchairs, people who are old, people from the Gulf and Vietnam war. It felt like a war zone. It felt like coming home to a war zone.”

It’s about more than race

Terry points out that the BLM movement and the Wall of Vets are about more than just the color of someone’s skin.

“We got a lot of publicity because we are veterans,” he says. “We are viewed as conservative or Republican. But not all of us are voting for Trump and running around with our guns out. There’s diversity in veterans. White veterans are out there, protesting, and white people, in general, are there protesting because they understand that Black people and people of color have been systematically oppressed for decades.”

“To defend the Constitution and the people of the United States,” is a phrase taken directly from the oath that anyone who serves in the military makes to the American people. While upholding that oath is part of the Wall of Vets mission, Terry says that the group is also working with individual organizations all over the country including Black Lives Matter, The Lincoln Project, and the Common Defense Fund on other fronts. The goal is to help, as they say on their Twitter page, “support peaceful protests and people exercising their Constitutional and Civil rights; we will stand as a shield between them and those who would violate those rights.”

Terry says he’s taken on the role of Director of Communications for the Wall of Veterans and is actively working to build their website, handle media requests, and manage social media, all while managing a busy household and going to school full-time at Portland State University, where he’s getting a degree in marketing and advertising. Tessa, pregnant with their third child, is still highly involved in Wall of Vets, and has a full-time job, too. Terry says that he hopes that the organization will have a long-lasting impact, help hold politicians accountable, and work toward equal rights for all.

“I gotta say it’s been a whirlwind,” Terry laughs. “We have been doing interviews, hosted on podcasts, organized into a nonprofit organization, we are still working out organizing chapters across the US. We have a website that we created that’s all been built on volunteer work,” Terry says. “The change in my life has been crazy, but it just helps us promote the message that veterans are in support of Black Lives Matter.”

Head to Shondaland to read more of my story.