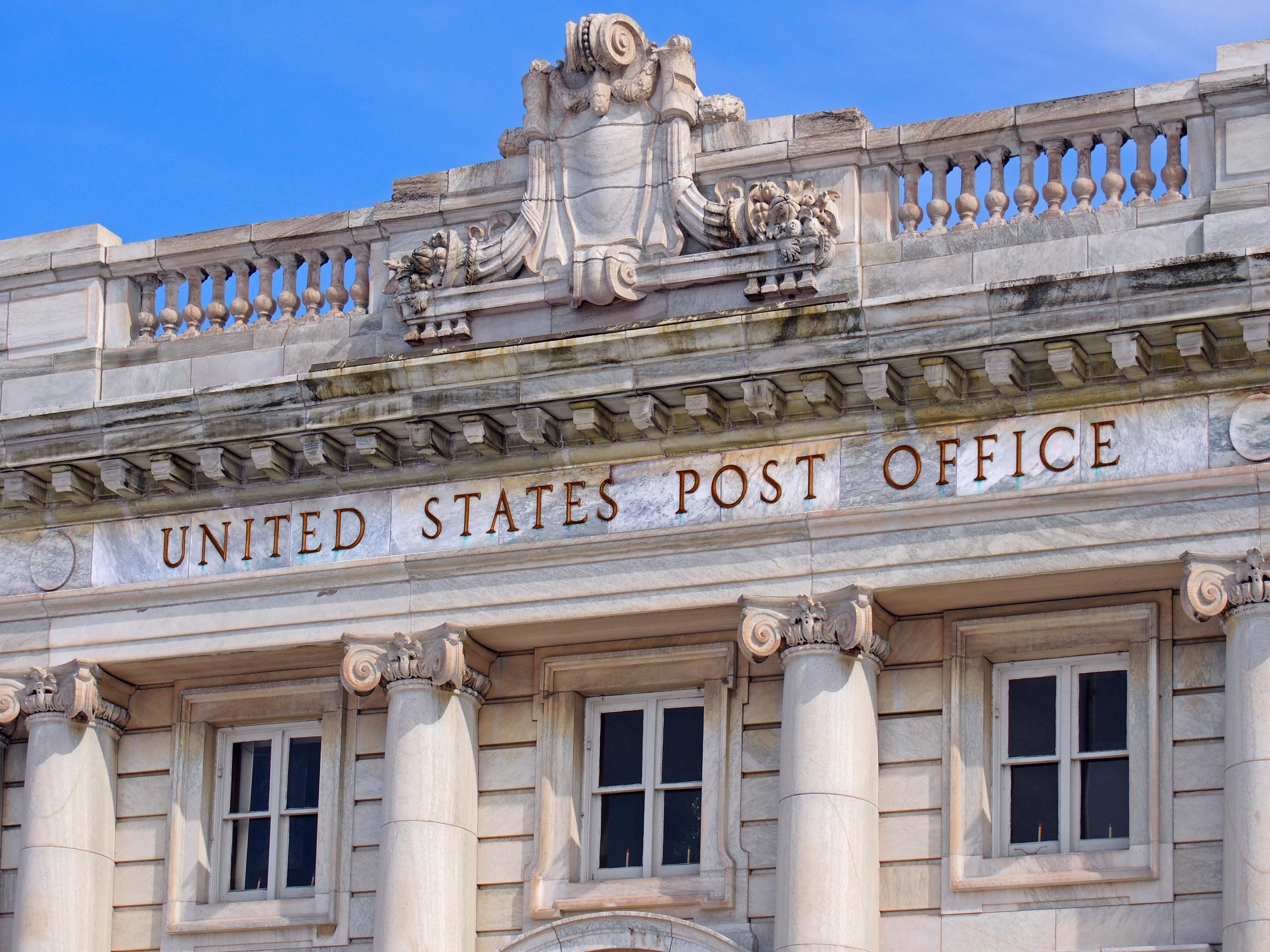 Founded in 1772, the USPS has always been a key component of American democracy. Now, it’s under severe threat.

“Neither snow nor rain nor heat nor gloom of night stays these couriers from the swift completion of their appointed rounds,” is the motto of the United States Post Service. The saying is chiseled into grey granite above the entrance of the U.S. Post Office on Eighth Avenue in New York City.

Yet, in this election year, the Post Office is under attack, and in some places, the mail that we’ve all come to rely upon for things like prescriptions, bills, checks, and the more frequent random Covid purchases, isn’t coming at all.

The mail is something that we all take for granted and expect to arrive regularly every day, six days a week (Monday through Saturday), but the changes that have been rolled out by the new Postmaster General, Louis DeJoy, are pronounced, and for some of the most vulnerable people in the country, those changes can be deadly. The issues caused by DeJoy’s cuts and the continued deficit that the Post Office functions under has raised significant concerns about mail-in voting all over the country, so much so that DeJoy testified before Congress on August 24 to defend his actions.

Despite his insistence that the cuts are to make the USPS more efficient, post offices across the country are reporting rotting food, giant piles of mail — including prescriptions — that have gone unsorted and undelivered, and even dead animals and rodents.

James O’Rourke is a professor of business management at Notre Dame, and he’s paid close attention to how the Post Office has been run for many years. He says that the changes DeJoy has made are intended to put pressure on the organization and make it look inefficient.

“The people who are influencing and directing the USPS are trying to make it difficult to do business in the present form,” O’Rourke says. “The postmaster general has taken a very broad ax to costs, and it would be noble to say, well, he’s just introducing a bit of tough love and discipline to the organization. That is, until you look at the numbers. The costs that he has cut won’t even come close to closing the budget gap that the USPS has. The cuts will only make the mail slower, and make the people dependent on the mail more anxious.”

The shortest and best answer is that it’s complicated, and many who closely follow the events and policies at the Post Office believe that in its current machinations, it is politically motivated. Here’s why.

The Post Office is an independent agency of the federal government. It is part of the Executive Branch, and it is one of the few federal agencies established in the U.S. Constitution (in Article I, Section VIII). The first Postmaster General was Benjamin Franklin, and George Washington believed that the postal service was the best way to “cultivate committed American citizens,” according to National Geographic, through the delivery of newspapers that kept the large and growing nation connected and informed.

The postal service was officially established by the Postal Service Act of 1792. Fast forward nearly 200 years to 1970, when postal workers went on strike because their salaries didn’t cover the cost of food and housing. According to National Geographic, some postal workers had to live off of food stamps and welfare, and the service was so backed up because of budget cuts that Christmas gifts were still being delivered on Valentine’s Day. That led to the initial push to run the postal service more like a business. A 1971 law turned the Post Office Department into a government-owned company who’s only financial requirement was that it broke even. By the 1990s, the USPS was turning a profit. Then email came into regular use, and revenues began to decline because people and businesses simply sent fewer letters.

In 2006 another law impacted the Postal service. Deemed the Postal Accountability and Enhancement Act, it strictly defined mail as packages and letters, and it required that the USPS fund retirement benefits for employees, 75 years out. The USPS has not been profitable since.

Post offices across the country are reporting rotting food, giant piles of mail including prescriptions, that have gone unsorted and undelivered.

“No other federal organization has been saddled with that kind of pre-funding mandate,” Professor O’Rourke says. That mandate expired in 2017, yet the Postal Service continues to make those payments into a health care trust fund, called retirees health care trust fund. The Post Office has $161 billion in debt, and $120 billion of that is the result of funding retiree benefits.”

That shortfall has been a source of ongoing controversy. So much so that the Post Office itself warned of the significant cash problems back in 2010 and suggested reform. Relief, however, has not come.

Fast forward to today: The advent of the pandemic hurt the USPS as fewer people sent mail and packages, and mail workers were on the front lines of it all since they are essential workers.

Additionally, President Trump has been on a year-long campaign to undermine the Postal Service’s reliability and has recently shifted his focus to voting by mail.

The CDC issued guidance in June, suggesting that offering voters alternative voting options, like voting by mail, would be the best way to reduce the chance of spreading COVID-19. Though it’s unclear which party, Democrat or Republican, would benefit from mail-in voting, the common thought is that more Democrats would vote by mail. As he faces declining poll numbers, Trump continues to tweet falsehoods about mail-in voting security. His behavior has become so egregious that Twitter has labeled a number of the President’s tweets as violating their Civic Integrity Policy since he repeatedly tweets false information and accusations about the Post Office.

Recently, however, the U.S. Postal Service warned 46 states that it could see delays in mail, and potential problems with mail-in ballots due to cuts implemented by the new Postmaster General, Louis DeJoy. DeJoy is a Trump appointee and a longtime Trump donor who, according to the New York Times, has donated more than $1.2 million to Trump and $1.3 million to the Republican party. DeJoy was also a deputy national fund-raising chairman for the G.O.P.

DeJoy took the Postmaster General position in June of this year. Since, he has made sweeping changes that have impacted mail delivery all over the nation. He has forced major post offices to do things like dismantle sorting machines, restrict overtime for postal workers, and forced mail trucks to leave on set schedules, regardless of whether or not they are filled.

“After the Postmaster General’s testimony on August 24,” Professor O’Rourke says, “he’s clear that he is not putting back anything that he’s taken out of the Post Office. In fact, when the election is over, he’s going to take out more. The USPS doesn’t have to make money. It just has to make a good faith effort to break even. The postal service is designed to provide an essential service. The notion is that the private sector can handle delivering the mail. The truth is that the private sector cannot handle it. What are we left to conclude is that the administration wants to disable or cripple the postal service. Why would they do that? They want to demonstrate that the service is unreliable and inefficient, and they want to make the argument that the government should privatize it.”

The best thing we can do to save the Post Office is to make sure that everyone who is eligible to vote exercises that right.

Yet, Professor O’Rourke says that the private sector cannot, despite what the administration would have the American people believe, handle what’s known as the “last mile” delivery of mail and goods, and remain profitable. Publicly-traded corporations, including Amazon, FedEx, UPS, and DHL, all outsource their last-mile delivery to the USPS because it is far more cost-effective for customers and shareholders. The USPS handles the distribution of mail and packages from a hub to the local doorsteps of millions of people each and every day. They even operate a mule train that delivers mail, food and other goods, to the bottom of the Grand Canyon. There’s simply no way that the big, private firms would be able to take that on, and keep shareholders happy, Professor O’Rourke says. It’s just too expensive.

“Pretend you were comparison shopping, shipping a traditional 11×14 envelope, with 12-14 ounces of content. The Post Office would charge you anywhere from $1.45 to $1.80 to ship it anywhere in the U.S. FedEx would charge you $19. The upper class wouldn’t think anything of that price. The middle class might cringe a bit and still do it. The working class in this country cannot afford it. They are cut out of the system if the Postal Service gets privatized,” O’Rourke says.

What Can We Do To Save the Post Office?

“Buying stamps isn’t going to save the Post Office,” Professor O’Rourke says. “It will only close about 2-4% of the shortfall.”

While you can do your part by buying merchandise and stamps from the USPS, (they have a fantastic dog costume, an awesome magic kit, and some great matchbox cars), there are actions you can take that will have a more significant impact.

Over the weekend of August 22, the House of Representatives passed an emergency $2.5 billion bill that included language that would stop any further changes by DeJoy until the election and get the USPS a small cash infusion. Speaker Pelosi (D-CA) took that bill directly to Senator McConnell (R-KY) who has said that he will not let the bill go to the floor of the Senate and has pocket vetoed it. O’Rourke points out that even if that bill did make it through the Senate, the President would not sign it. “The best thing you can do is call your Senators and put pressure on them,” O’Rourke said, but not to push the bill through. “If Congress repealed the retirement funding requirement for the Post Office, it would free up much more cash for them.”

You can also choose to sign a petition like the one at Change.org, the one at the Center for American Progress, or other places like Common Cause, and Move.org. Additionally, it helps to be kind and patient with postal workers. They are under extreme pressure right now, and many are working late, and in difficult conditions, to deliver medicine, Medicare and Social Security checks, and goods. Complaining to local Postmasters or carriers if mail or packages are late probably won’t do much good, but supporting these essential workers can. Kindness will go a long way.

The best thing we can do to save the Post Office, however, is to make sure that everyone who is eligible to vote exercises that right even if it means standing in long lines, with masks on, on November 3.

If you plan to vote absentee or via mail, get your ballot in early. You can check your state’s rules for early voting, at Vote.org. Know that you can still vote by mail if your state allows it and that the Post Office publicly announced that they “have a robust and tested process for proper handling and timely delivery of Election Mail,” despite Trump’s false tweets and outrageous public statements.

“The Post Office is central to Democracy,” O’Rourke says, “and every single voting-age person has the right to make their opinion known by voting.”

You can see the full story over at Shondaland.