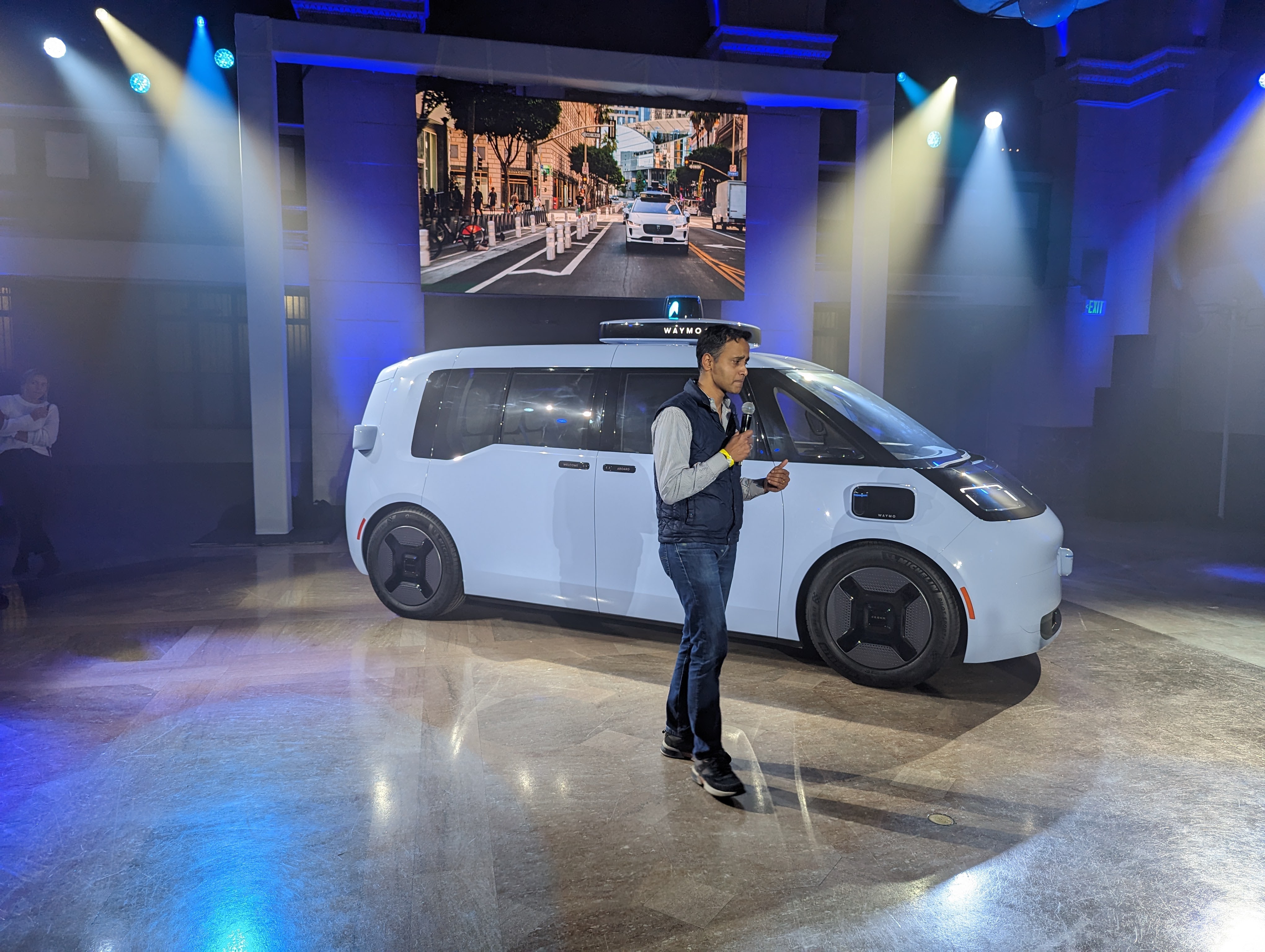 The Alphabet company got together with Geely’s Zeekr to build its next-generation autonomous people mover, and it’s as notable for what it’s missing (steering wheel, side-view mirrors) as for what it’s got.

Read the full story at The Verge.

Waymo, the Alphabet-owned autonomous taxi company that currently operates in a small handful of cities, showed off a brand-new prototype vehicle made by Geely’s luxury Zeekr brand last week at a splashy invite-only event in downtown Los Angeles.

While Waymo has largely used production vehicles like the Chrysler Pacifica and Jaguar i-Pace to shuttle passengers around cities like Phoenix and San Francisco, this is the second ground-up design that Waymo has unveiled. The first was the Firefly, which was retired in 2017.

This time, the company partnered with Chinese automaker Geely to design a purpose-built, passenger-first autonomous vehicle. Geely owns automakers like Volvo, Lotus, and Polestar, as well as a stake in the luxury British automaker Aston Martin. The company makes luxury vehicles mostly for the Chinese market. The partnership between Zeekr and Waymo was originally announced in December of 2021. Waymo just recently announced that it will expand its autonomous ride-hailing service to Los Angeles.

Unlike the Zoox vehicle that was unveiled in 2020, the Waymo-Zeekr vehicle doesn’t appear to have the ability to drive in either direction. In fact, the Waymo One Zeekr looks strikingly similar to the Zeekr M-Vision, a van-like vehicle with softly rounded corners, which was announced by the company on the same day as the Waymo event. Zeekr says that the Zeekr M will be ready for mass production by 2024 and can go for as many as 16 hours of continuous all-electric driving.

During the presentation, Waymo noted that the vehicle will be 30 percent more efficient than anything else on the street currently, but spokespersons at the to share any specific details of when we might see the people mover on US roads or many of its specifications.

Waymo noted that the vehicle will be 30 percent more efficient than anything else on the street.

Zeekr says that the platform, known as SEA-M, is specifically designed to “support a range of future mobility products including robotaxis, multi-purpose vehicles, and logistics vehicles” and that it’s built around the passenger rather than the driver. Waymo’s release says that the vehicle is 15.4 feet long (4.7 m) and 9.18 feet wide (1.8 m) with a wheelbase length of 9.8 feet. The turning circle is under 32 feet (10 m).

Like Amazon’s Zoox vehicle, its people-mover shape is bifurcated by a pair of sliding doors that move forward and back to reveal a spacious interior with seats for five passengers. All the seats in the prototype face forward, though Zeekr has shown off the Zeekr M with more of a living room setup with the seats facing each other and a table at the center of the vehicle, more reminiscent of a train-style setup.

According to a release from Waymo, the front seats offer power reclining and tilting features and have a number of phone charging ports. There is plenty of room behind the back seats for a number of suitcases, but most notably, the prototype had no steering wheel, and Waymo spokespeople confirmed that they are continuing to work with local, state, and federal regulators to make the Zeekr vehicle street-legal without the steering wheel in place.

In its place, a single large tablet is attached to the center of the dashboard, where passengers can input destinations, play media, get a view of the path and surroundings of the vehicle, and find out more about their route. On the back of the two front seats sit another pair of tablets where back seat passengers can do the same as those in the front.

The designers at Zeekr also have included accessibility considerations in the new Waymo vehicle, including a low floor that’s easy to step into, a wide opening for the doors, and Braille for those who are visually impaired.

Those presenting at the event came from a variety of companies, including Waymo, Geely, Zeekr, and CEVT, a Swedish mobility company, and they all noted that the design was focused on offering what they called a “lifestyle capsule.” Designers included soft-touch materials that are easy to clean since “passengers like to touch everything,” Yoojung Ahn, the head of design at Waymo, said during her portion of the presentation.

Outside, the main lidar system is roof mounted in a round module and includes the latest sensor suite that the company works with. Around the vehicle are a number of smaller sensors attached to the front corners, rear, and front center of the vehicle. Waymo has included a lighting signature outside the vehicle to help riders identify their vehicle for easier pickup.

The designers noted that the Zeekr vehicle was designed specifically to maximize passenger space while efficiently packaging the sensor suites needed to create a fully autonomous vehicle. Since the robotaxi is still a prototype and presumably wouldn’t need a human to pilot it, there are no side-view mirrors or rear-view mirrors inside. In order to make this particular vehicle street-legal in its current form, Waymo would need to get a Federal Motor Vehicle Safety Standard exemption from the National Highway Traffic Safety Administration.

There’s a good possibility that these vehicles sans-steering-wheel-or-human-required mirrors could be on the roads in the coming years since the National Highway Safety Transportation Administration recently updated its rules about autonomous vehicles. But that’s not to say that there aren’t plenty of regulatory hurdles that Waymo will still have to surmount.

It will likely take some time and work to get to the driverless version of the permit, which would allow the Waymo-Zeekr vehicle to operate on public roads. While Waymo’s vehicles and the company continue to make incremental progress toward truly driverless robotaxis, the progress is slow because developing the technology and safety protocols and navigating the necessary red tape in each state is costly, complex, and difficult. So it’s safe to say that you shouldn’t expect to be able to hail a driverless Waymo-Zeekr vehicle any time soon.