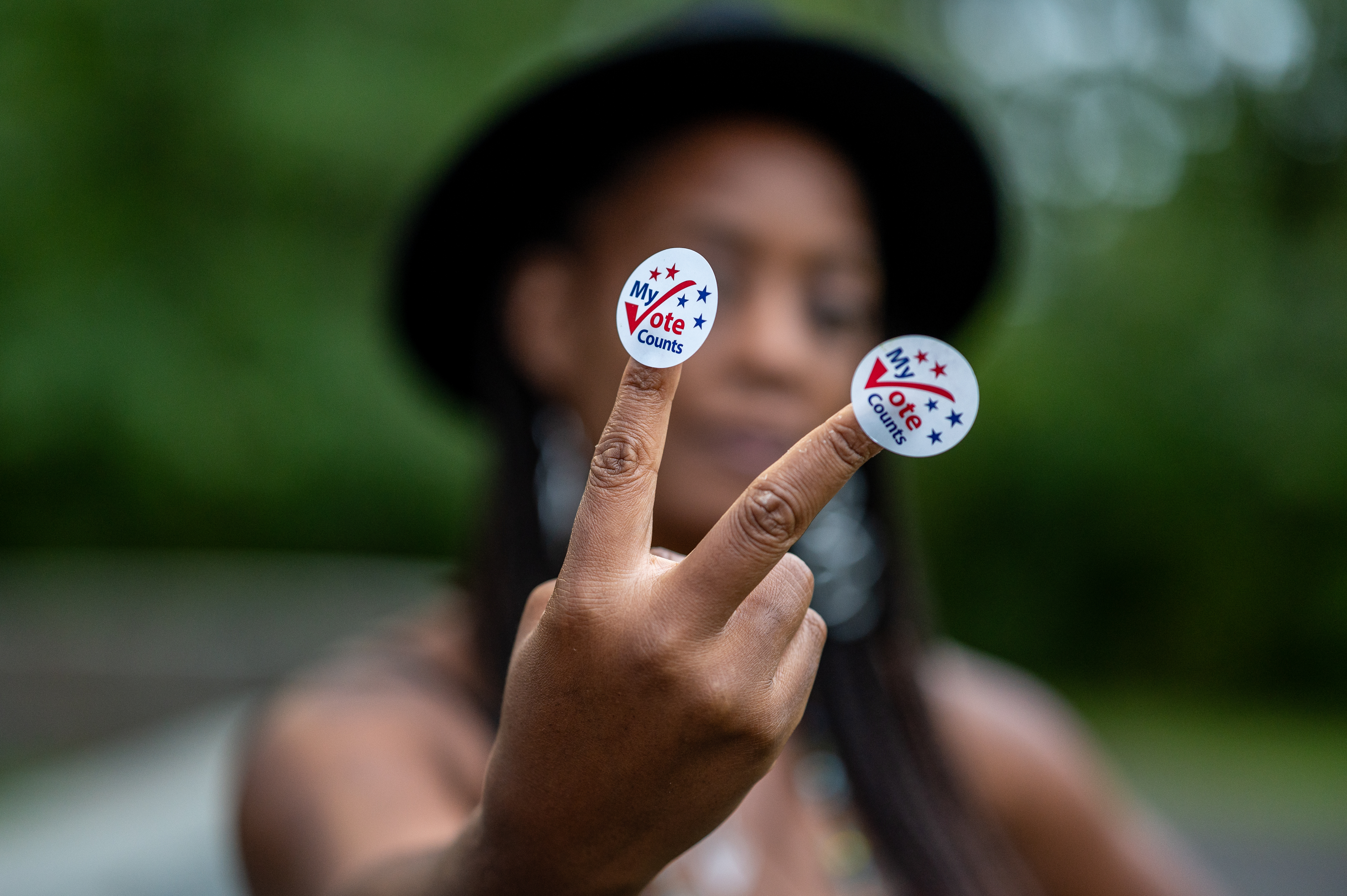 Read the full story at Shondaland.

Following Tuesday’s historic midterm elections — a test of America’s democracy and its ability to heal after the January 6 attacks on the Capitol — the outcome is still unclear. Control of Congress hangs in the balance as votes on closely fought races continue to be counted, with current counts as of Thursday morning still showing toss-ups in both the House and the Senate. The final outcomes lie in the results of Senate and House races in Georgia, Arizona, and Nevada.

The House and Senate Are Still Up for Grabs

While the “Red Wave” (meaning Republicans sweeping the Democrats) never appeared, it does look like Republicans could still gain a slight majority in both the House and the Senate, according to The New York Times. Final counts were still coming in for Nevada, Arizona, and Georgia as of this writing. The Senate race in Georgia will require a runoff election in December, which will further delay the final results of the midterms and may prevent either party from claiming a victory.

According to the Times, this year’s midterm elections represent one of the “weakest performances in a decade” for the party that does not hold the White House. And many are calling it a “red ripple,” since Republicans failed to sweep the races they’d anticipated taking. Should the House and Senate go to the Republicans once final votes are counted and runoffs take place, the next two years are likely to be full of delays and potential government shutdowns, as Republicans are fully expected to drag their feet on all of President Biden’s legislative ambitions.

All these results have some wide-sweeping implications for everything from the January 6 investigations to federal protections for abortion, immigration, and LGBTQ rights.

Highlights From the States

One of the biggest issues on the docket in this year’s midterm election was abortion. When the Supreme Court overturned the historic Roe v. Wade decision on June 24 this year, it removed more than 50 years of abortion protection for women. Following that decision, 13 states banned abortion. Tuesday’s election is the first following the decision, and in six states, abortion-related proposals were on the ballot.

In California, Vermont, and Michigan, voters decided to incorporate abortion protections into their state constitutions, protecting the rights of women to control what happens to their bodies. In Kentucky, a state constitutional amendment to further restrict already restricted abortion rights failed. Montana voters chose whether to further expand already repressive abortion laws.

In Montana, voters went to the polls to determine the hotly debated topic of personhood, a legal term that has become the new rallying cry for the anti-abortion front and a fight that the Supreme Court declined to take on in October this year. Personhood extends the legal rights and protections given to any person, including fetuses in utero as early as six weeks of pregnancy. Montana voters voted on Legislative Referendum 131, which declared that an embryo or fetus is a legal person with legal protections and rights to medical care if born alive. More importantly, it would criminalize health-care providers who don’t do everything in their power to keep a fetus alive, even if that fetus would not survive as a result of birth defects or other issues that can arise during pregnancy and birth. A health-care provider who violates the “born-alive infant” law could face criminal penalties of up to 20 years in prison and up to a $50,000 fine. Currently, according to CNN, the outcome is too close to call.

With Republicans in charge of Congress (should the final votes go in that direction), there is some concern that a constitutional ban on abortion might make its way through the federal government. As The New York Times points out, Republicans have shifted their messaging on abortion since it’s clear that the American public largely disagrees with the conservatives on banning abortion, but they could be pressured by the right-wing, Trump-supporting faction of the party.

Six states also decided on laws surrounding the legalization of marijuana and certain psychedelics during the midterm elections on Tuesday. Maryland and Missouri both voted to legalize recreational use and possession of marijuana for those over 21, while North Dakota, South Dakota, and Arkansas voted against legalization. Colorado passed a new law to decriminalize and regulate certain psychedelics and mushrooms. Colorado joins Oregon, as well as a handful of cities like Ann Arbor, Michigan; Denver, Colorado; and Oakland, California, in the legalization of psychedelic fungi like psilocybin mushrooms.

Prior to the midterms, 38 states had legalized medical marijuana, while 19 had legalized recreational use and possession. In October, President Biden announced his marijuana reform plan, which included pardons for those imprisoned for marijuana possession, a step toward decriminalizing weed. While Biden’s declaration still falls short of legalizing the drug nationally, it did move the ball forward on an issue that Americans increasingly support.

Inflation and the Economy

Regardless of the final outcome of the midterm elections, Americans could see some impact on the economy and inflation following the elections. As Bankrate notes, based on a recent survey, should the Republicans take Congress, it’s safe to assume that there will be nothing but gridlock around economic issues, including student loan debt relief, which has already been hamstrung by a number of legal challenges to Biden’s initial plan. If Congress is split, with the Senate going to the Democrats and the House going to the Republicans, it’s also safe to bet that there will be very limited movement on economic issues and student loan debt.

In spite of growing anti-LGBTQ sentiment and laws prohibiting everything from gender-affirming care to transgender rights, it was a historic night for the LGBTQ community. A total of 678 LGBTQ candidates, across all 50 states, were on the ballot for the first time in history, and two gay women won. Democrat Becca Balint will become the first openly gay person and the first woman to represent Vermont in Congress. Democrat Maura Healey will become Massachusetts’ first openly lesbian governor.

It’s safe to expect that if Congress goes to the Republicans or splits, with the Democrats running the Senate and Republicans winning the House, the issue of immigration will continue to remain stalled. As The New York Times points out, compromising on the issues around everything from Dreamers to border-control policies has been an elusive and nearly impossible task for the government for decades. That’s unlikely to change regardless of the outcome of the midterm elections.

There were a number of voting rights initiatives on the ballot across the country. Voting laws and rights vary from state to state and even city to city. Connecticut voted on earlier in-person voting. Michigan did as well. Nevada is poised to shift to ranked voting. Arizona rejected tighter in-person voter-ID laws. Nebraska tightened voter-ID laws. Ohio tightened citizenship voting laws, and Alabama prohibited changes to election laws within six months of the general election. Many of these shifts help provide fair and equitable voting access to everyone, while others raise hurdles to voting.

Two states voted on gun laws yesterday: Iowa and Oregon. In Iowa, voters passed a law enshrining the right to bear arms in the state constitution, which will likely make it more difficult to pass further gun laws in the state. Oregon, however, tightened gun laws and will require those purchasing a gun to get a permit, pass a background check, submit fingerprints, pay a fee, and enroll in a safety course.

The Takeaway From the Midterm Elections

The main takeaway from this year’s hotly contested midterm elections is that the country is still deeply divided along partisan lines. According to The New York Times, voting fell largely along party lines with Democrats supporting Democrats, and Republicans supporting Republicans. There are fewer swing voters.

In the coming days as final votes are tallied, we’ll get a better idea of just what the future holds for the country (at least for the next two years until the 2024 presidential election). With the possibility of Trump and current Republican Governor of Florida Ron DeSantis announcing runs for president in the coming days and weeks, the upcoming presidential election will likely be just as divisive and chaotic. That is, of course, if Trump doesn’t end up being indicted for his involvement in the January 6 attack on the Capitol, tax evasion, or his removal of classified documents from the White House.