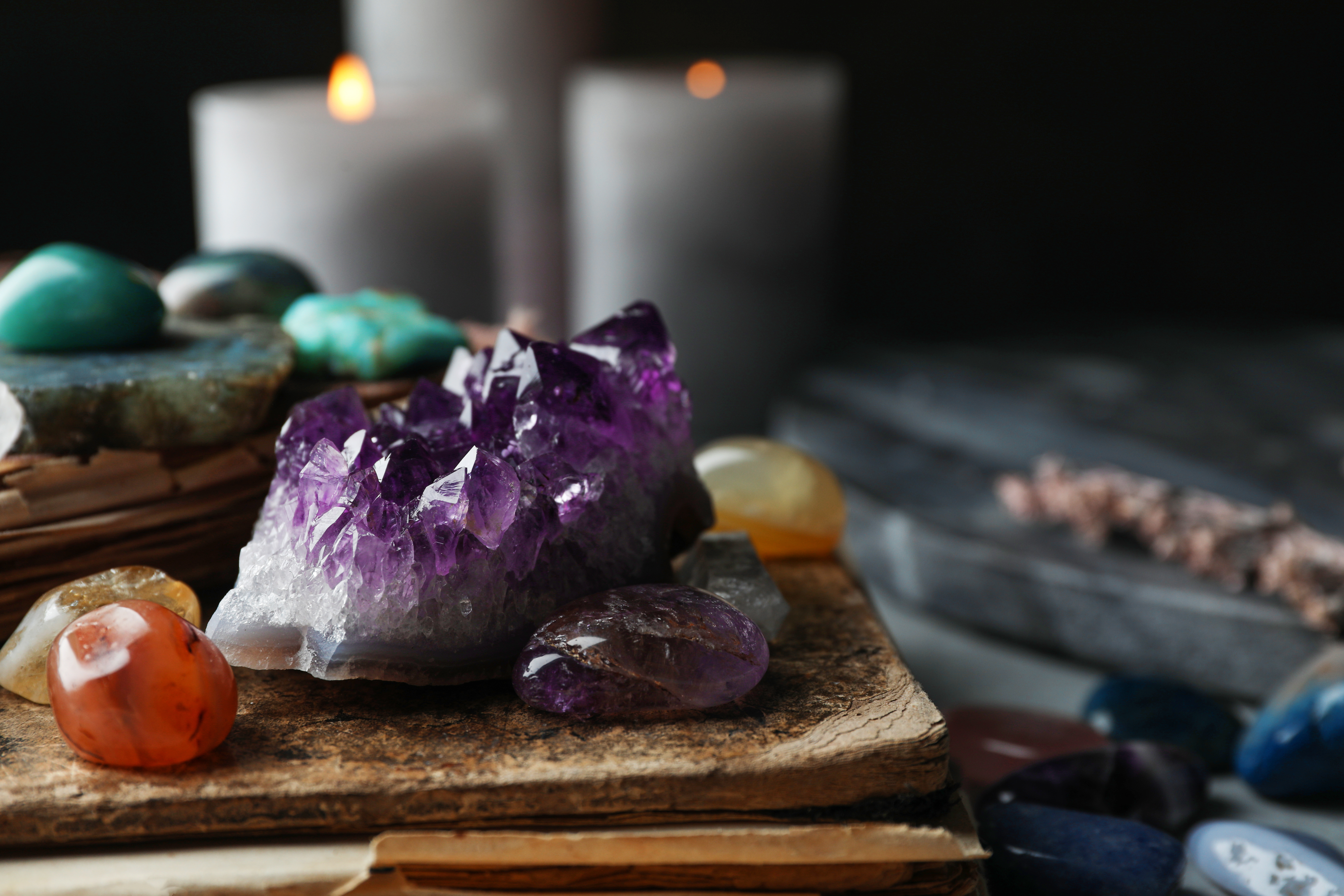 Whether you’re curious about what your future holds or feel like you need a little nudge to make a decision, you may have considered talking to a psychic. Psychics can range from people who claim to see your future, to those who give you more general guidance on what areas of life you can work on for personal development. Some say they can remove curses, and others may claim that they can talk to your dead relatives.

Before you dismiss psychics outright, it is important to know that there has been a lot of academic and even governmental research into psychics. The University of Arizona had a dedicated lab, called VERITAS, that studied psychic phenomenon (the efforts concluded in 2008, though the co-director went on to start the Windbridge Research Center which certifies mediums), the U.S. government has reportedly studied psychic abilities for use during war, and psychics have been used to solve unsolved crimes.

You can find psychics touting their abilities online or in locations all over the world, but before you go seeking the answers to your deepest darkest desires, it pays to know what you could be in for. Here’s what you need to know about psychics before you drop any cold hard cash.

Always take fortune-telling with a grain of salt

Many psychics that you find online use the disclaimer “for entertainment purposes only.” That characterization is a bit of a double-edged sword, and you should be aware of it before working with a psychic. Essentially, if you take advice based on something a psychic tells you, you can’t later go back and sue that psychic for, say, losing a bunch of money on the stock market or not getting a medical condition treated. You shouldn’t let a psychic influence significant life decisions no matter how “gifted” they appear.

Second, it’s important to take any “future” prediction with a large grain of logical salt. There have been plenty of high-profile cases and huge judgments (resulting in jail time and major damages) against fraudulent psychics, who have run huge scams targeting desperate people. Psychics often use basic human psychology to tell you what you want to hear, as this pair of neuroscientists found out when they went to investigate a Phoenix Psychic Fair.

The good news is that some psychics will do a reading that is less predictive and more guidance-based, one that points to areas in your life you can focus on and what energy you can cultivate in your life to meet your goals and develop psychologically and spiritually. These kinds of psychics, or esoteric practitioners, aren’t looking to predict the future as much as help you understand your current situations through a spiritual or metaphysical lens so that you can grow into your highest potential.

We all want to believe, but we should still remain skeptical

For the last few years, Chapman University has put out a study about paranormal beliefs — or the belief in things like psychics’ abilities and the existence of ghosts. The most recent research shows that women are more likely to believe in psychics and “new age” tools like Tarot or crystals. It also indicates that paranormal belief is on the rise and attributes that rise to the fact that most of our beliefs are shifting from those of organized religion to personalized forms of spirituality. The research shows that we all tend to gravitate towards paranormal beliefs, based less on what we know (our knowledge) but more on what we feel or see.

It follows that we tend to see the things we want to when it comes to future predictions and psychic phenomena, which can make us vulnerable to the power of suggestion. Some psychics use common tools to read body language and gauge how well they are “hitting the nail on the head” when it comes to making predictions, as those neuroscientists found when they went to the psychic fair.

Psychics commonly use “hot” and “cold readings” to connect with clients, also referred to as “sitters.”

Hot readings generally mean that the psychic uses social media tools and searches to learn more about the person sitting in front of them before they arrive. They then use that information to create a very specific reading for the sitter.

Cold readings generally start with the psychic asking questions about the sitter and gauging their reactions to judge how close they are to something that the sitter wants to be true.

All this is to say you should go into any psychic reading with a healthy dose of skepticism, keep your wits about you, and know that many readings should be taken as entertainment rather than rote.

If you’re really interested in seeing a psychic, it’s great to find one through word-of-mouth. With today’s prevalence of esoteric practices, it’s likely you might have a friend, or at least an acquaintance, who’s visited one and can send over a reputable name.

The phrase psychic is more of a catch-all for all kinds of “future tellers,” and there are a wide variety of different types of psychics you can find both online and in real life. Some practitioners use different tools to divine the future, such as tarot cards or tea leaves, while others report being able to do it over the phone, by interacting with a special object or performing a special ritual. Because the world of future telling and fortune telling is still so muddy and there aren’t really any governing bodies and definitions are a bit fluid. If you’re looking for a specific kind of energy worker, be sure to clarify what kind you’re interested in.

Here are some of the most common types of psychics out there.

Generally, psychics tell things about events, places, people, and times that are unknown to them. They don’t tend to commune or communicate with the dead.

Mediums are one of the most popular types of psychics out there, and they tend to specialize in speaking to and connecting with the dead. These people should have the ability to contact the dead reliably, regularly, and on-demand, according to the Windbridge Research Center.

These practitioners generally are classified as empaths or people who can feel the emotions of others. Intuitives and clairvoyants typically get strong images, feelings, or thoughts about the sitter. These visions can be related to those who have died or relate to living and breathing people and events in the current time.

These types of energy workers use tools like tarot cards or the time, date, and location of your birth to tell someone’s specific future or communicate with the dead.

Many psychics offer more than one type of reading, so, for example, it’s possible to find someone who is both an intuitive and an astrologer. Regardless of the type of psychic you choose, it’s essential to know that there are frauds out there. Anyone who asks for increasing amounts of money, or demands that you perform specific rituals with costly items that only they sell, should raise warning bells for you. Just be sure to keep your wits about you if you decide to work with a psychic and look them up online before committing cash to the equation. You can find out a lot with a simple Google search and a little research. Perhaps approach hiring a psychic the same way you might vet a story you see online or find a therapist. That way, you can be sure you’re not falling prey to a scam.

Tarot cards can help guide your time with your psychic.ALEXTHQGETTY IMAGES

So are psychics for real?

Ultimately the jury is still out on whether or not psychics can really foretell the future. In some cases, a tiny percentage of psychics have displayed some uncanny abilities that can’t be explained away. While there are far more stories of fraud, there may be some who have true spiritual gifts. Scientific and governmental studies have neither proven nor disproven psychic abilities.

That being said, many psychics can offer a sense of peace or encourage you to follow a long-time dream or make a hard decision, and that can be incredibly valuable in today’s rather uncertain world. No matter which side of the debate you fall on, it’s essential to educate yourself before deciding to take a psychic’s advice to heart. Look for warnings of fraud (because sadly it’s more common than not).

Do your research on the person you’d like to connect with and always keep your wits about you — especially if the person asks you to part with significant sums of money. We’re all vulnerable to the power of suggestion, especially when we’re dealing with loss or trauma. If nothing else, you can seek out a practitioner who offers general, positive guidance as opposed to hard predictions and directives.

Read the full story at Shondaland.