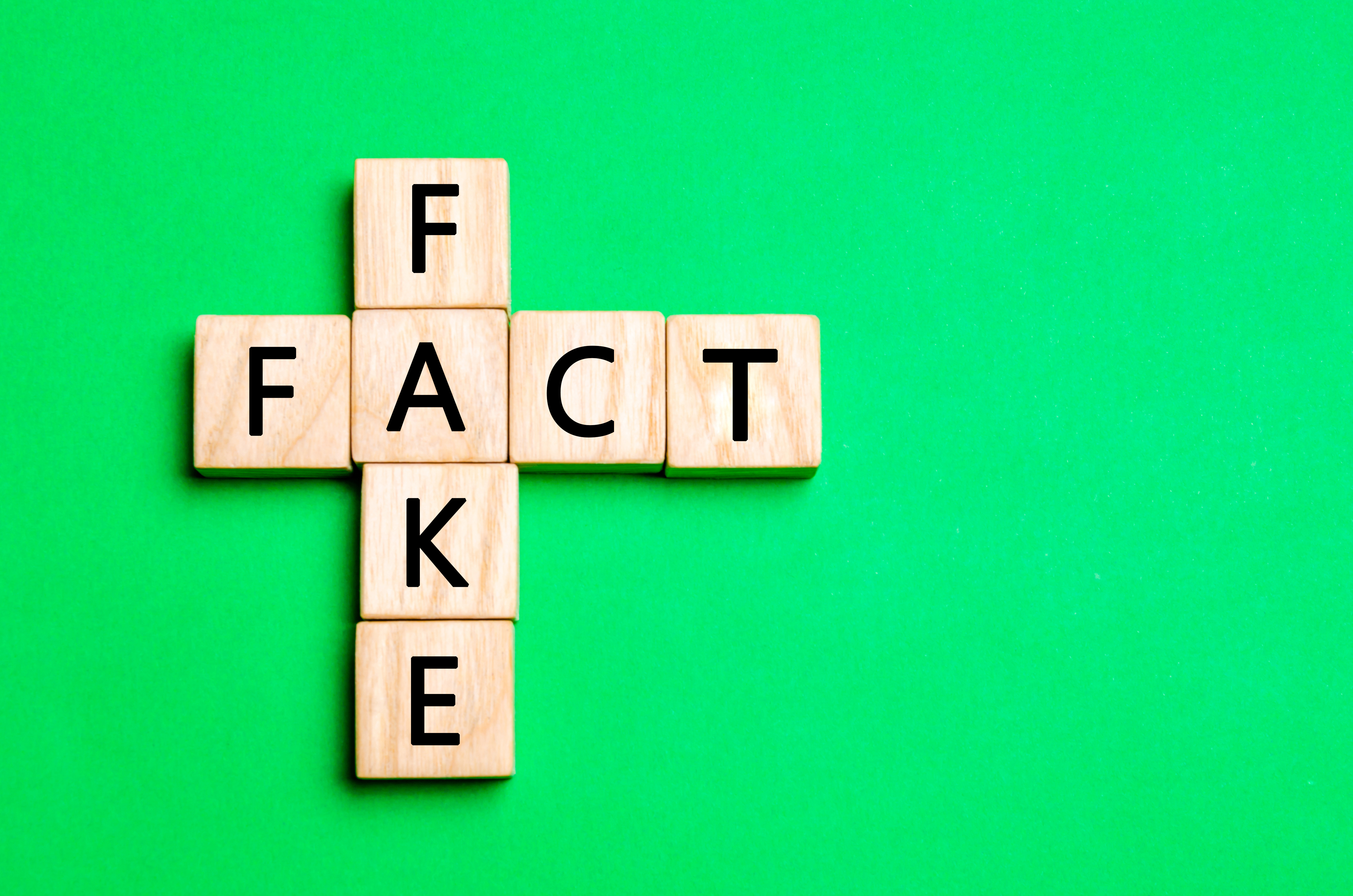 For the last four years, the president of the United States has waged war against the news media, truth, science, and fact. Trump’s tweets, strange rants from the White House pulpit, and his repeated insistence on the proliferation of “fake news” has damaged our society, our ability to tell the truth from the lies, and it has rendered the very fabric of our society as a free and democratic country. It’s also hurt our individual ability to tell what is real and what isn’t anymore.

This isn’t mere hyperbole, either. Top think tanks (both conservative and liberal), universities, and social scientists have repeatedly shown how Trump’s war on information has deeply divided and damaged the public’s trust in truth, fact, and science. While some proclaim this the “post-fact” or “post-truth” world, now, more than ever, it’s vital that we as global citizens find ways to discern the truth and protect ourselves from rampant disinformation and misinformation.

A great way to do this is to start thinking like a journalist. Our line of work requires us to be diligent fact-checkers, to cross-reference whatever we learn while researching, seeking out multiple sources of information before writing about a given topic. At least this is what’s expected at reputable outlets.

Here are some ways to protect yourself from disinformation that I’ve used throughout my career.

Misinformation is (according to Dictionary.com), “false information that is spread, regardless of intent to mislead.” Misinformation gets shared every single day.

Disinformation, on the other hand is “false information, as about a country’s military strength or plans, disseminated by a government or intelligence agency in a hostile act of tactical political subversion.” Dictionary.com also says, “It is also used more generally to mean “deliberately misleading or biased information; manipulated narrative or facts; propaganda.” Trump’s tweets, for example, fall under disinformation because there is an explicit intent to mislead in order to support his own political or financial aspirations.

There have been plenty of historical efforts at dispersing both disinformation and misinformation. The most infamous and nefarious ranging from the Nazi propaganda machine to our current world of outlandish QAnon rhetoric, Russian interference in the 2016 election, and the recent outright false allegations of voter fraud from President Trump. These kinds of campaigns are run mostly on social media, which is part of what makes them so sticky and so poisonous to our democracy and the world.

Be judicious about the media you consume

In truth, that’s very difficult to do. We are constantly bombarded with messages, ads, and information that can color our opinions, our approach to the world, and our lives. If we can become more mindful about what we choose to let into our awareness and more aware of how that makes us feel, we can become more judicious about the media we consume.

What if you valued where you place your attention as much as you value the cash in your bank account? Imagine that your attention is like dollars. You only have so many that you can spend, so why waste them on media that doesn’t nourish, enrich, or enhance your life or knowledge in some way? Why not spend your mental money on true, provable facts rather than sugary lies? You curate your social media feeds; why not curate your news outlets, too?

The best way to start to do this is to use your discernment to decide how you might best spend your mental energy when consuming media. Note how scrolling through endless pages of news bulletins make you feel. For example, while we may all get some entertainment (and in some cases, comfort) from reading our horoscopes regularly, most people don’t believe that horoscopes are fact. Knowing the difference between entertainment (drama, tweets, social media) and true fact is key. Just like we are judicious with what we eat and put into our bodies, we need to become more judicious about what we allow into our minds, too.

Do your own fact-checking

If you’re reading something from a questionable outlet, on social media, or elsewhere, it’s imperative that you become your own fact-checker. The best way to do this is to think like a scientist or a journalist and get really procedural about verifying the facts you read.

First, if something seems fishy, you should isolate the questionable fact. So say, for example, you’re flipping through social media and see the claim that 10,150 Americans were killed by illegal immigrants in 2018, a claim that circulated widely on social media earlier this year.

The first step to verify this would be to look up how many Americans were killed in the U.S. in 2018. A quick search would show that the number of people killed in the U.S. in that year, according to the FBI, was 16,214. That would mean that more than 60 percent of the homicides in the U.S. would have had to have been committed by illegal immigrants, a claim that cannot be true because, as Pew Research reports, only 3.2 percent of the population is made up of what they call “unauthorized immigrants.” This Reuters story goes on to point out that ICE reported 2,028 total homicide offenses in 2018. All of that math adds up to indicate that the “fact” that you read on social media is patently false. As Reuters correctly concludes, “While there is no official record that specifically tracks crimes committed by ‘illegal immigrants’ in the U.S., the closest available data available from ICE and the FBI show the claimed number of homicides committed by ‘illegal immigrants’ is, by any imaginable means, exaggerated.”

Next, be sure you are on a legitimate news site. Most major news organizations have their own URLs that end in .com. Be wary of anything that ends in .com.co or other permutations. If you’re looking at a site and something seems fishy, you should visit the about page and see if you can find out more about who might be funding it or what the mission statement is. You should also check whether other legitimate media outlets are reporting on the topic, as well. That can also help you weed out potential misinformation.

If you’re looking at an image or a video, know that deep fakes are very real, and they can be very difficult to spot. A simple way to check the veracity of something you are looking at is to do a reverse image search and see where the image or video pops up. Doing so can lead you to other reputable sources who can help you verify what you are seeing.

Another way to do your own fact-checking is to find more than one primary source to support the facts. Don’t just mindlessly consume whatever is served up to you in your Google feed. Be an active participant in what you consume and ask questions. If you read something and it doesn’t seem to make sense, look it up and try to understand more about it or verify that it is true. If a story cites a report or study, follow the link (because a link should always be provided), and read the research or report yourself to understand more about it. It pays to be inquisitive.

Finally, you can also use tools like Factcheck.org, Snopes, and the American Press Institute to double-check the veracity of things you read, too. For more options for fact-checking, check out this primer from the University of Georgia.

Get information from more than one reputable source

Variety is the spice of life, and it makes you smarter. Reading, listening to, or watching both sides of an argument can help you gain perspective, make better decisions, and make you more well-informed and well-rounded as a human being. It also strengthens your ability to decipher the facts and truth from the falsehoods and potentially engage in productive dialogue with people you may not see eye-to-eye with.

If you’re a diehard MSNBC or CNN fan, it can be extremely valuable to spend some time watching Fox News and getting the opposite perspective on the facts of the day. While we tend to shy away from engaging with things we disagree with, it can pay tremendous dividends when you’re trying to find the real truth of things and protect yourself from misinformation.

Our experiences impact how we see the world, and while journalists do our best to avoid bias, it can creep into our reporting. It can also color the way you read something, hear something, or see it on television. Confirmation bias is a real thing, and it’s something we all have a duty to continually rein in.

Here’s an excellent way to try and check whether you’re approaching a fact or story with bias.

These tips have been adapted from the American Academy of Family Physicians’ tips to help doctors and nurses address their implicit bias in providing medical care.

Try not to get your news from social media

It should go without saying that you should never, ever, ever, rely solely on social media for your information. Platforms like Facebook, Twitter, Instagram, and even YouTube are solely entertainment sites designed to keep you scrolling within their platform. They all use standard psychological tools to keep you engaged (hi, the algorithm). They are not news sites. Let me say that again for the people in the back: Social media is NOT news. The mix of personal and political makes it very hard to discern the truth, even as platforms like Facebook and Twitter have taken a harder line against anything that is false or fake (including continuing to label the president’s tweets as false as we untangle the election results.)

Here’s the thing, social media is curated reality. We post attractive selfies, vast landscapes, and cute photos of our pets in a bid to gain attention and likes from our peers. That system is not a good platform for getting factual, real, accurate information.

In fact, getting your news from social media showed can be downright dangerous, especially in the current pandemic. A recent study from Harvard showed that “Exposure to social media is associated with misperceptions regarding basic facts about Covid-19 while the inverse is true for news media. These misperceptions are, in turn, associated with lower compliance with social distancing measures. We thus draw a clear link from misinformation circulating on social media, notably Twitter, to behaviors and attitudes that potentially magnify the scale and lethality of Covid-19.”

What’s worse is social media simply fuels the fires of disinformation. How often has a relative or friend shared something on any platform that you know to be untrue, and then you see it re-shared a thousand more times? If you do choose to share on social media, it’s on you to be sure that you are sharing legitimate information by doing your own legwork and following the tips above.

Investing the time and energy is worth it

Sure it’s easy to be spoon-fed news in your feed or just turn on the television and tune out, but as active participants in society, it is our responsibility and duty to protect ourselves from disinformation. In this post-truth and post-fact world, it’s imperative that we, as consumers, do our part to determine whether or not something we see, read, or share is true. Discovering and discerning real facts and truth is no longer only up to the media outlets. It’s up to each one of us. The future of our democracy and a free press relies on the ability of all of us to get smart about truth.

Read my full story at Shondaland.