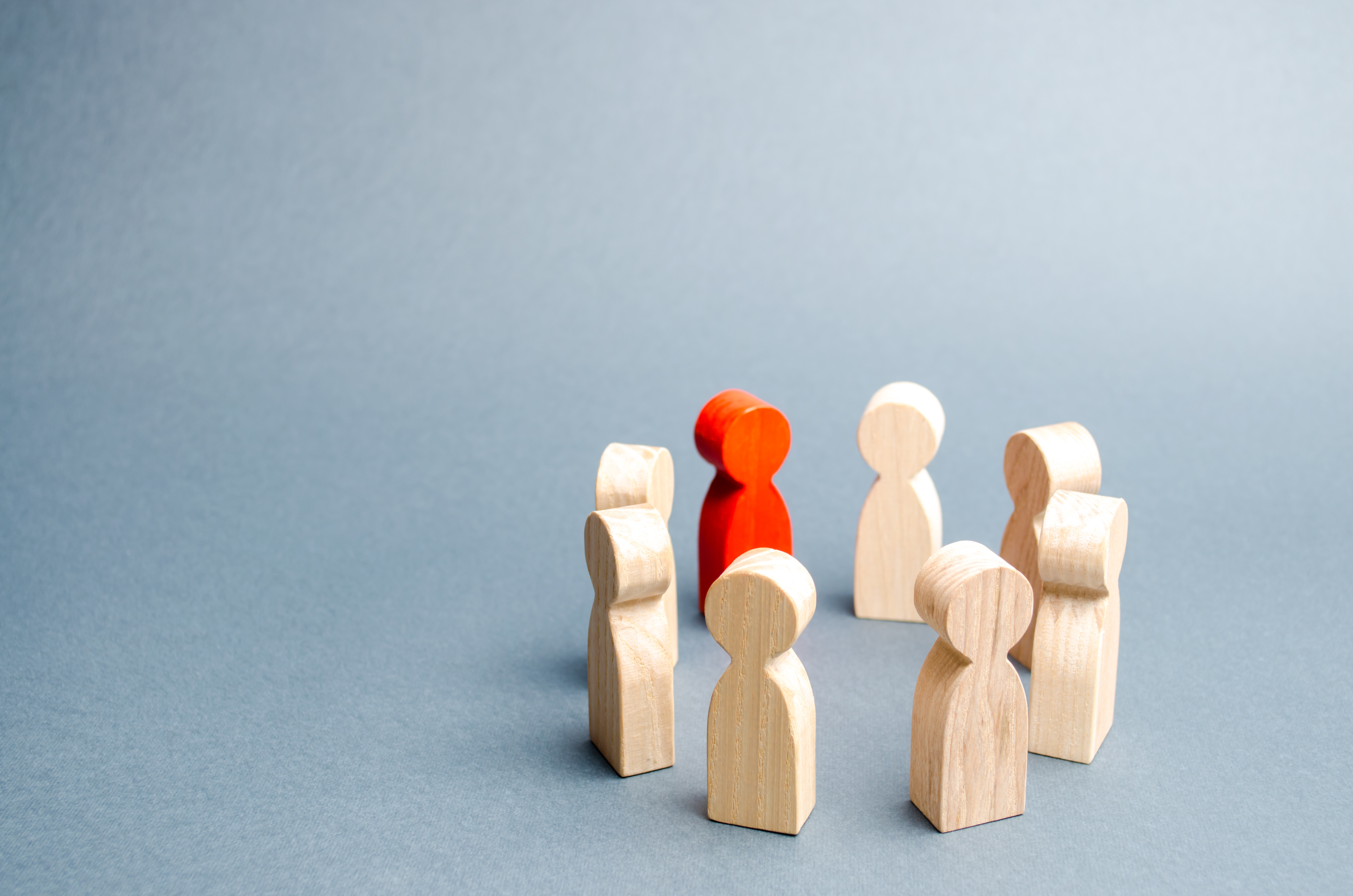 Experts weigh in on how to deal with toxic people in a healthy, practical way.

Like the term “canceled,” you probably see “toxic” tossed around a lot online.

If you’ve spent any amount of time on social media you’ve stumbled across plenty of posts from friends, brands, and even people you don’t know about taking care of yourself by “getting rid of toxic people,” or “cutting people out.”

Do a quick search for the hashtag #toxicpeople on Instagram, and you come up with just shy of half a million posts. Simply search for #toxic, and you get more than 1.1 million posts, most of them in reference to wellness-related platitudes like, “Distance yourself from negative energy,” and “Don’t let toxic people rent space in your head.” The hashtags #toxicMasculinity and #toxicFeminism have also recently popped to the top of search on Twitter, in reference to various abusive and outsized behaviors and reactions by members of different genders. So what’s all this “toxic” talk about?

What does “toxic” mean?

Toxic, at least on social media, is a pejorative term for people others consider to be poisonous, negative, controlling, or cruel. It’s also often associated with narcissism, another popular social media term that many don’t totally understand. Posting about cutting someone out of your life who you consider “toxic” appears to be a badge of honor. Share that you’ve somehow eliminated them from your life to garner likes and popularity, and publicly shame whoever it is you are obliquely referring to in your post into changing their ways.

The trend appears to be on the uptick thanks in part to COVID-19 and the resulting isolation, relationship pressure, and stress we’re all feeling as the U.S. continues on its determined path to become the top nation for cases of the virus. As of a recent count by the New York Times, on July 23, the country has more than 4 million diagnosed cases nationwide, and more than 150 medical experts nationwide recently called for the U.S. to go back into a shutdown to attempt to slow the continuing spread.

Calling someone toxic on social media is often a quick, easy way to dismiss whatever deeper level issues are going on for you or the person you’re referring to, and “cut them out of your life,” at least publicly. Yet the term toxic has connotations in the mental health world, according to Jenn Kennedy, LMFT, a marriage and family therapist in Santa Barbara who also specializes in peer relationships.

“Toxic is a relational term of how someone affects another. Toxic people will leave you feeling bad: edgy, guilty, confused, frustrated, overextended. They lack boundaries and ask too much from you, so you leave exchanges feeling violated and exhausted. They make assumptions, expect too much, disregard your ‘no’ answers,” Kennedy says.

Kennedy says that the term “toxic” rose to greater public awareness when Britney Spears released her song, “Toxic,” back in 2003. With that, she says, she saw the rise of the term in her practice as well.

“The rise of the term toxic [came about] as psychology had us looking at our families of origin or our complicated, messy love relationships,” Kennedy says, and with the advent of COVID-19 forcing us to stay home and focusing our energy online, the term appears to be here to stay.

How to deal with a toxic person

Dealing with someone who is “toxic” or who behaves in a way that is abusive, controlling, or cruel takes a lot more than simply labeling them as “toxic” on social media. These people can undermine your confidence, leave you feeling depleted after being around them, make you feel like you did something wrong, or make you feel like you don’t know yourself. While “toxic” is tossed around online, there are real, concrete steps you can take to deal with someone who makes you feel bad about yourself, whether they do it in virtual or in real life.

“First we must examine ourselves,” Kennedy says, “but part of that discovery is also looking at who we choose to have in our world. Intimate partners, close friends, and family members are notorious for pushing our buttons and crossing our boundaries, thus being toxic. They seem to have a fast track to our triggers and feel free to activate us frequently.”

Knowing yourself means examining your own reactions to specific situations and events that happen and discerning whether your responses are, in fact, justified, or merely outsized emotional responses to some of the other stresses we are all facing in other aspects of our lives.

For example, if you’ve ever had a bad day at work and come home (or in this new world, simply walked into the kitchen) only to fight with your spouse, loved one, partner or kid about, say, doing the dishes, you certainly know what an outsized response looks like. In many cases, you aren’t actually upset about the dishes sitting in the sink, you’re angry at the way your boss treated you, or how a client spoke to you, and you’re taking your anxiety and frustration out on those you love. Generally, when you have an outsized reaction to something in your life, you feel regretful after losing your cool and apologize for your “crazy” behavior.

Getting clear about how we’re really feeling in the moment is really crucial to understanding how to manage our responses to stressors in our environment. Yet, as Kennedy notes, some people know how to push our buttons and, in some cases, do it on purpose because they, too, are feeling the pressure of something else. In many cases, these kinds of people have something more significant going on.

It’s very important to show yourself (and others) some compassion in these moments, too. It’s impossible to know everything going on in someone else’s head or experience, and compassion can help us cut both ourselves and others a little slack in these stressful times. If you think you are in a relationship with someone who fits the definition of “toxic,” you should take steps to separate and protect yourself from that person.

“Setting boundaries is going to be critical if you have someone toxic in your life,” Kennedy says, “It’s important for you first to have clarity about what you need and want and then communicate that with the person. They very well may not be able to hear it or understand it.”

Be honest with the person who is abusive towards you about the impact that their behavior has and see how they respond. If they continue to be abusive towards you and don’t change their actions, even after you bring those actions to their attention, it’s time to minimize your interaction with them.

“You return calls less often, or you limit how much time you spend with them. You don’t overextend to compensate for their shortcomings. Rather, you hold steady and stay in your lane. It’s going to feel foreign to not ‘save them,’ but ultimately, you will feel better,” Kennedy says.

It can be very difficult to back away from someone you have had a relationship with, yet if you have tried to communicate how their behavior impacts you and those discussions have borne no fruit, it’s time to be proactive and protect yourself. In some cases, toxic relationships can become both physically and mentally abusive.

“The biggest challenge of trying eliminate a toxic person from your life,” Kennedy says, “is that you are going to feel guilty. ‘They need you’ or ‘You are the only one they have’ might come up. Often toxic people have few close people in their life, so they hold on tightly. They may use manipulation, guilt, or crisis to keep you on the hook. You have to stay steady in your resolve in your boundary. You have to let them feel disappointed when you don’t rescue them from their bad behavior or excessive need. Reflect back on your personal strength and stand firm in your self-respect. They will change or the relationship will end and they will find someone else who will indulge their negativity.”

If you’ve addressed toxic behavior with the person exhibiting it and they have taken it to heart, it’s possible for toxic people to change.

“Toxic people can absolutely change,” Kennedy says, “however they must see their part in the problem before they are likely to find the motivation to do so.”

Kennedy says that it’s likely that the person being abusive or controlling towards you struggles with their own issues. “Likely they are unhappy but don’t know why,” she says. There are specific steps they must take, however, to change their behavior.

Reflect back on your personal strength and stand firm in your self-respect. They will change or the relationship will end and they will find someone else who will indulge their negativity.

“First, they must recognize their own misery and acknowledge the patterns that likely exist: people in their life have come and gone; they are negative, critical, judgmental, demanding, entitled; intimate relationships are fraught with arguments and drama. To change, they have to take responsibility for how they show up to relationships and how much they expect from others.”

At their very base, like all people, toxic people want to be loved and supported. Change takes hard work, patience, and support from a variety of people. If you or a loved one is in a toxic relationship, it can be valuable to seek help from outside sources like mental health professionals. They can help you identify the issues and help you decide what steps to take.

It’s also important to note that we are not all innocent when it comes to toxic behaviors. We all have them, and it can be valuable to take some time to do some self-reflection and investigation to see where you might be able to improve your relationships both to yourself and to those around you. With a little patience, thought, compassion, and applied effort, you can change your own behaviors to improve your relationship with yourself and others around you. After all, toxic relationships don’t happen in a bubble. It takes two to tango.

You can read this story over at Shondaland.com.